My hurried, ill-thought through and provisional reactions to the election

Written in a rush, so expect errors of fact and grammar. Also, full disclosure I have been out of the UK since February.

1 – There is a (possibly apocraphyl) story that during a state visit to Paris in the 1970s, Zhou Enlai – Mao’s Primeminister – was asked what he thought of the French revolution. He is suppposed to have replied that ‘it was too early to tell’. I basically feel the same way about this election.

2 – Relatedly, this election feels like it marks a transition from one phase of British politics to another. Like when we moved from Butskellism to Thatcherism. I confess I cannot really tell what the new epoch is however (and I suspect neither can you!)

3 – Can we all just agree now that First-Past-the-Post is an unbelievably crap electoral system! Even with the two main parties winning a far higher share of the vote than they normally do, we still haven’t got one of the stable, single party governments that are supposedly its benefit.

4 – Regardless of my more sobre assesement of who would be a better Primeminister, I find it intensely gratifying that voters didn’t reward May’s defensive, condescending and cynical campaign.

4 – I do not envy Theresa May having to try and run a government. The Tory/DUP alliance has a tiny commons minority. A figure I saw recently was 5. By-election loses and the like will likely chip away at that. That means that she must ensure that the entire spectrum of Tory opinion is content, from the most rabid right-winger to wettest wet.

5. This is not a straightforward defeat. The Party gained a strikingly large number of seats including from Labour. That suggests that like Labour it is metamorphising. The resulting butterfly seems to have a rather Trumpian hue: 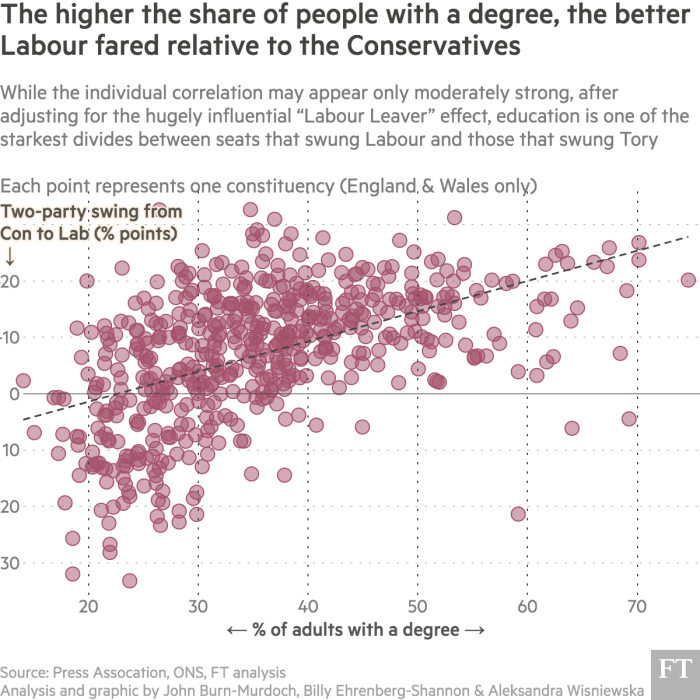 Oh the irony. The Conservatives framed Corbyn for associating with hardliners and then end up dependent on the DUP.

7 – Whatever else good comes out of this, I suspect that May and Timothy haven’t got the votes to bring back Grammar Schools. For which thank goodness!

8 – This result challenges my preconceptions about what voters in the UK would accept, as much as Trump’s victory did about the tolerances of American voters. I genuinely assumed that both Corbyn as an individual and his platform would be toxic. I was clearly wrong.

9 – However, it does not follow from the above that Corbynism is not electorally problematic. Merely, that we potentially need to substantially revise downwards the size of that problem. We should expect oppositions to gain seats. That’s what oppositions generally do. Especially, when faced with a Primeminister who campaigns with the caution of a gambler but none of the flair. Not saying that he wasn’t an electoral asset mind. Simply, that we have to explore the question more.

10 – Labour supporters do need to remember it got fewer votes and seats than the Conservatives. What many in the part have achieved is objectively impressive. However, a way milder than expected defeat is still a defeat.

11 – Speaking of which, my sense is that the next step for Labour is going to be harder. They have convinced the electorate to trust them as an implement to humble the Tories. Now, they must persuade voters to they deserve to take power in their own right. That is a bigger ask, and I don’t think they are ready yet.

12 – I’ll write about my own party’s performance in more detail elsewhere. But suffice to say, what a relief! That was looking scary for a moment, a further loss of seats would have made a return to relevance into something like the ascent of Nanga Parbat.

13 – Despite my previous support for him, I suspect that Farron probably needs to go. I suspect that Swinson is the right person to replace him but I reserve judgement for now.

14 – I’m curious (as an ignorant outsider) whether they will start to face pressure from within their own community to take their seats in Westminster. I appreciate that there is a lot of history behind the decision not to. However, if the price of that is letting the DUP hold the balance of power in the Commons, then surely the temptation to start voting must be there?

One thought on “My hurried, ill-thought through and provisional reactions to the election”