Note: I am writing this quickly on my phone, so apologises for spelling and grammar errors and the lack of citations 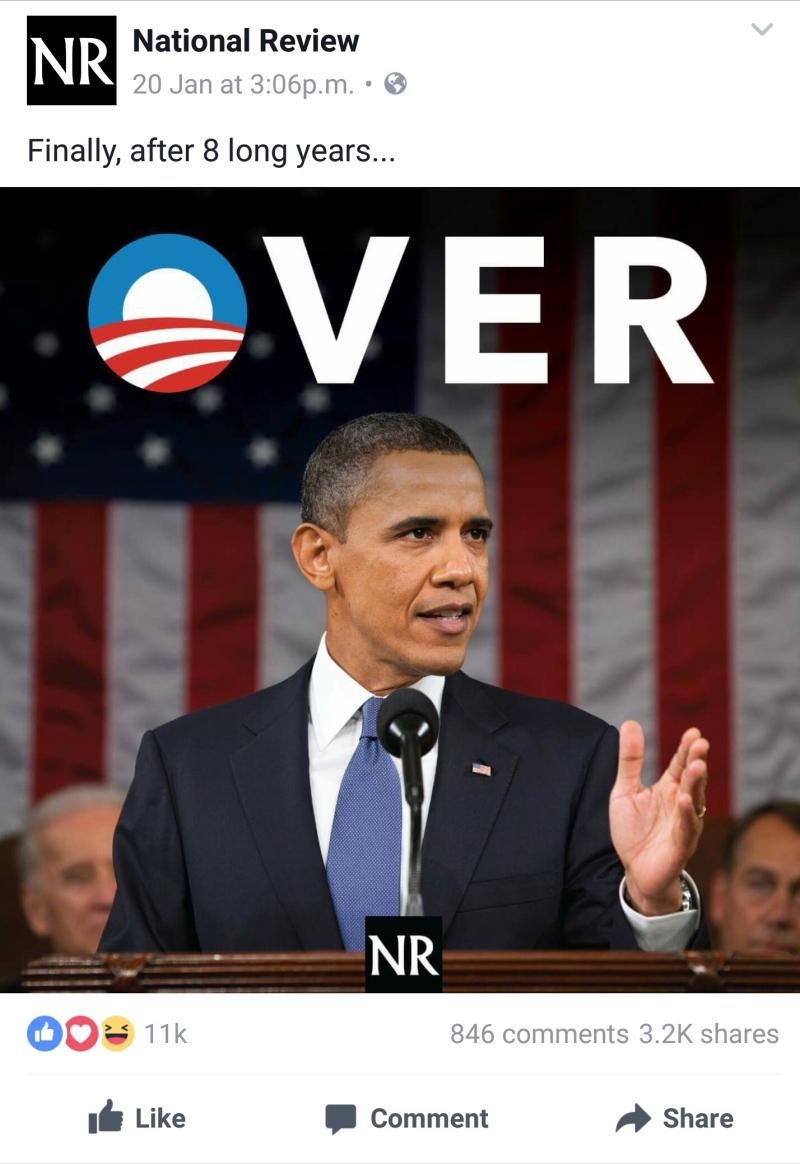 I saw the above on my Facebook feed this morning from the most important right-leaning magazine in America. And it made me realise that many conservatives have no idea how lucky they have been to have President Obama as an opponent.

Their opposition to him has been tenacious and unprecedented. Virtually every initiative of Obama’s presidency has been opposed by every single Republican congressman and Senator. By contrast, many of the key parts of President George W. Bush’s agenda – the Iraq War, the Patriot Act and No Child Left Behind – were backed by a clear majority of congressional Democrats. And conservative opposition went beyond policy. Polls suggested that around half of Republican voters – one of whom is now President – believed the racially tinged concoction that Obama was not born in America and therefore inelligible for the office he held.

The ferocity of this fightback might lead one to imagine that it was directed against a uniquely implacable and unrelenting foe. In fact, Obama’s whole political identity was built on the possibility of finding common ground with opponents. The speech to the 2004 Democratic convention that propelled him to national prominence proclaimed that “there are no red states and blue states, there is only the United States“.

That wasn’t mere rhetoric. He appointed multiple Republicans to his administration including not one but two Secretaries of Defence. His signature healthcare policy was borrowed from Mitt Romney’s tenure as a governor, who borrowed it from right-leaning think tanks trying to devising a conservative alternative to single payer. To the horror of many of his liberal supporters, he not only continued but intensified Bush’s policies on drone strokes and mass surveillance. He spoke in defence of free speech on campuses and about the dangers of political correctness. And he ensured that the African-American president was not a radical like Jesse Jackson or Al Sharpton but a man who emphasised his Americaness over his blackness.
They are unlikely to be so lucky again. The Republicans are remaking the Democrats in their image. The success of Sanders insurgency has demonstrated that the Democratic Party is on its way to becoming as liberal as the Republicans are conservative. The Sanders insurgency was an explicit rejection of Obama’s compromises: notably in the conviction that the Affordable Care Act was inadequate and that only single payer would do. That was predictable: what is the point of trying to compromise with a movement that has spent 8 years being so uncompromising. The strength of conservative opposition to Obama has apparently proved him wrong that there are no Red and Blue Americas. Democrats now operate in a deeply divided political system where their only way to win is take all without compromise. And the changing demographics of America may well enable them to do just that. It thus may come to be that in the decades to come, Republicans look back on Obama as the good kind of Democrat president.

To the Dark Side and back

This review focuses on the final section of Rogue One. While there are few explicit spoilers – at least if you’ve seen a New Hope! – you can probably infer a lot.

More or less from the moment that Rogue One’s premise was announced I’ve been excited about it. A tale of the forgotten Rebel heroes who stole the plans for the Death Star sounded distinct from anything the franchise had attempted before: a story of spies and soldiers rather than mystic warriors. This sounded reminiscent of my favourite parts of the now defunct Expanded Universe, which tended to the grimiest and most grounded installments in it. Then Felicity Jones – who I last saw giving an Oscar nominated performance as Stephen Hawking’s wife in the Theory of Everything – was cast in the lead and it picked up another big plus mark in my mental tally. Next the trailers came along, and they were intense and packed with foreboding and gorgeous looking visuals. It came to seem important as well as entertaining when Trump won the American presidency and some of his supporters amongst the ‘alt-right’ identified a female led story of a multi-racial band of heroes defying a fascist regime as a threat to their movement. Oh and having already psyched myself up for it being the film of the year, it was then released in Korea a fortnight later then everywhere else, with the result that I was hearing from friend after friend how great it was.

For the first hour, I wondered if my galaxy sized expectations were doing the film a disservice. I was impressed by the more grounded feel, by Star Wars delivering fight scenes worth watching as fight scenes for the first time, and most of all by K2, the snarky war droid faintly reminiscent of Marvin from the Hitchhiker’s Guide.* But I wasn’t really engaged enough to truly relish Rogue One.

Then it moved into its final act and it suddenly began doing the impossible: not only meeting but exceeding my absurd expectations. That’s all the more striking because I usually hate final acts in which smaller confrontations give way to masses of explosions. And let’s be clear, the finale of Rogue One does not want for explosions. There are explosions in buildings, explosions on beaches and explosions in space. Plus there are a lot of things happening at once, many of them involving characters we’ve barely seen before, which can become jumbled and disengaging if handled badly. This was largely what sunk the Phantom Menace.

But director Gareth Edwards turns it into something stunning. He unfolds a tapestry of warfare, that’s bleak and brutal but also affirms the possibility of defying seemingly impossible odds. The best sequence to illustrate that doesn’t even feature the main heroes. The Death Star plans are aboard a rebel ship and have been put onto the drive that will eventually be stowed into R2D2 in A New Hope. However, the ship has been damaged and now boarded by the Imperial forces. A group of nameless rebel soldiers stand in a corridor, guns at the ready, awaiting the onslaught of Stormtroopers. Instead they find themselves facing Darth Vader. They shoot at him but this is of course in vein. He can deflect their blasts with his lightsaber. As he slices through those nameless soldiers, and on one occasion uses the force to smash them against the ceiling, the soldier at the end of the corridor tries desperately to open a door so he can pass the plans to a colleague on the other side. Which he succeeds in doing just before his inevitable demise at the hands of the Sith lord.

This is not what victory looks like in most films. It does not constitute a happy ending because in no way does it make you feel happy. It is as gloomy as those trailers promised. I’d go further and say that by the end Rogue One is harrowing. It makes you feel the desperation of the characters: they know that success is nearly impossible but pursue that small possibility with a ferocious determination and little regard to their own survival.

Star Wars has always thought itself important. There are people who agree and even try to turn it into a religion. That claim’s never been all that convincing. Its mythology is just too silly. But with Rogue One, the franchise makes its best case that it is indeed something more than an entertaining fairy tale. It is not only riveting, though it clearly is. Nor is it simply powerful, though I was struck dumb with emotion. Rather it is Star Wars engaging with war in all its violence, horror and heroism. And it’s epic, in every sense of that word.