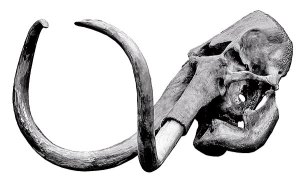 The Ancient Greeks may have concluded that cyclops existed based on fossils. The mythical giant one eyed creature that menanced Odysseus and his crew may have been based on a mammoth skull. According to National Geographic: “to paleontologists today, the large hole in the center of the skull suggests a pronounced trunk. To the ancient Greeks, Deinotherium skulls could well be the foundation for their tales of the fearsome one-eyed Cyclops.”