The art of silliness

The Minions demonstrates the intelligence and hard work required to make an apparently stupid film.

I spend rather more time thinking about the Minions than a grown man really ought to. Despite this I’m not really sure about the exact alchemy that makes them so appealing. They somehow manage the peculiar feat of combining the normally contradictory traits of cuteness and weirdness. Their burbling is somehow endearing rather than grating.

That they have a very humanoid form but are very clearly not human probably helps as it keeps them well clear of uncanny valley. Certainly those big expressive faces, especially the eyes, help. And their strange patois has a musicality to it.

However, I suspect that what ultimately make them so likable is that they are very childlike. Indeed, I’ve found that now I work with children the Minions have become (even) funnier. They perfectly reflect a seven year old’s combination of excitability, innocence, eagerness to please and the attention span of an ant. Oh and one of them is always yelling something incomprehensible for some unfathomable reason. They thus tap into our primal affection for our young.

The appeal of the Minions may come from an instinctive place but that doesn’t mean they were created that way. As Pierre Coffin, the director and voice of the Minions, records they had to be crafted not only for their own sake but as an element of a bigger film:

In the first film, they were depicted as this big army of muscular thugs doing the dirty work of the arch villain Gru and we quickly realised that they were very unappealing and made Gru a totally unsympathetic anti-hero.

“To make him charming, we had this idea that he’d know all of his little helpers by their forenames, even though there were hundreds, and suddenly Gru was sympathetic. We then put goggles on them, added workers’ overalls, making them look like these subterranean mole men-type creatures, gave them an increasingly saturated yellow skin tone and then they became the Minions. And from that first scene we knew they gave the other characters counter-balance, had great comedic potential and were super cute.

And to move from supporting characters to the centre of the film they have to be recrafted. They’re no longer simply an extension of Gru: they now have their own history and journey. And they’re made more distinctive from each other with their differing personalities emphasised.

Indeed the Minions is a good reminder that what is dumb fun for the audience requires, if done well, hard work and intelligence from the filmakers. Millions of manhours must have been spent at computers shaping the onscreen images down to the last blade of grass. The jokes are not hugely original, the climactic gag is very similar to something the Shrek films did, but from the Minions doing the Universal theme ownwards they land with a speed and regularity that belies any idea they happened by accident. And while it lacks any performance quite as stellar as Steve Carrell as Gru, the voice work is nonetheless still huge fun. Jennifer Saunders as the Queen is a particular blast.

The end product may be dumb fun but to make this kind of film requires very smart people working very hard.

Summary: 8/10 – it doesn’t quite match Despicable Me 1 and 2 but the Minions is still a ludicrous amount of fun.

I think we can all agree that another Minion post is long overdue. So here’s a video of some ‘Minions’ dancing to Pharrell Williams’ Happy.

Well this is disturbing!

I’d normally be delighted if someone makes a random mash up of two of my favourite films. However, this picture of a minion as the Joker is probably going to give me nightmares: 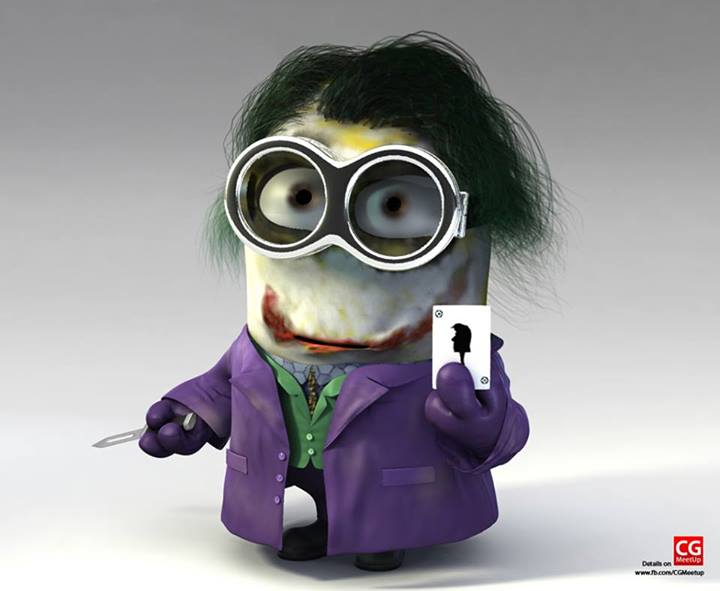 My Mum has knitted me a minion 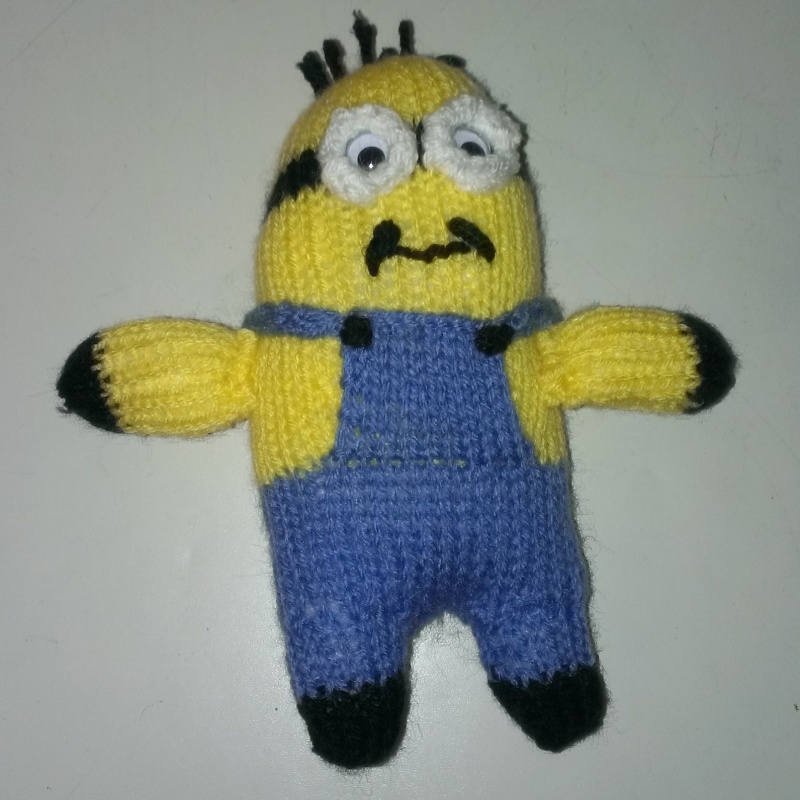 Because love is making your 25 year old son a toy of his favourite character from a children’s film – which he first saw aged 24! 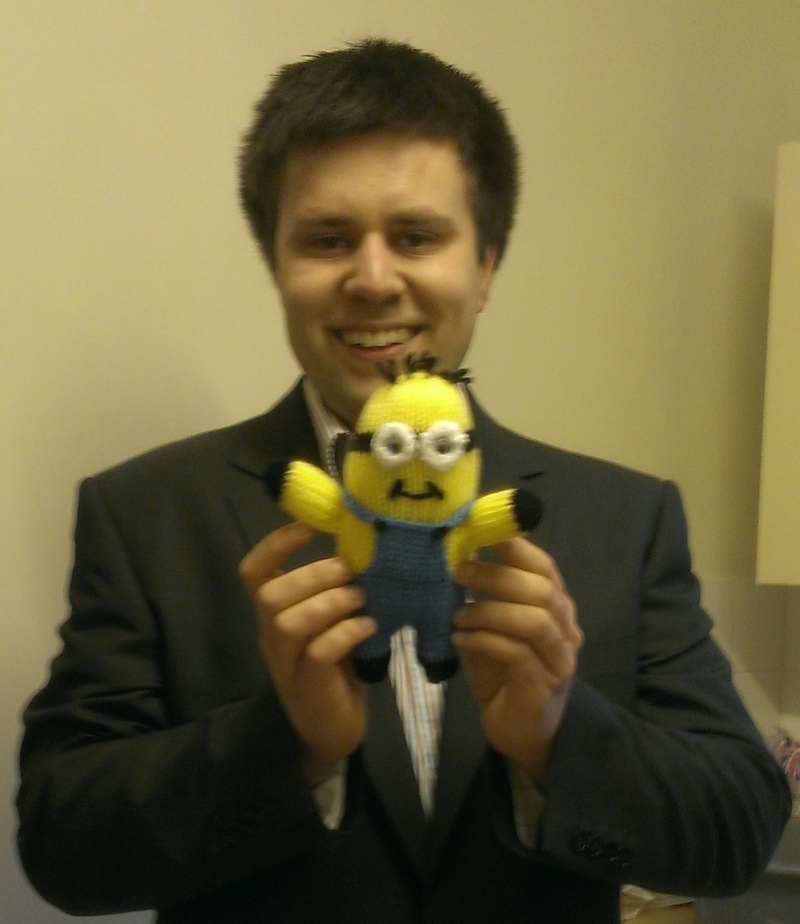 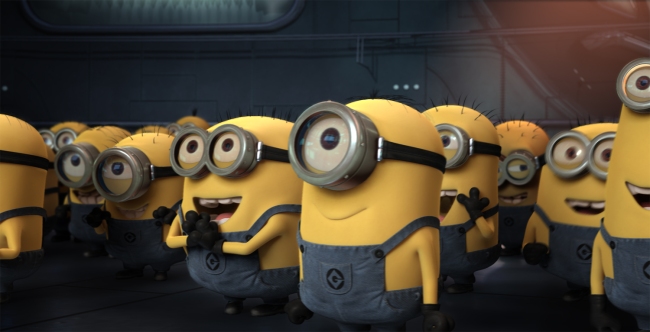 I hope you will forgive this piece of self congratulation. However, much to surprise a post of mine seems to have become rather popular.

I wrote this piece about the Minions being voiced by Despicable Me’s co-directors partly to lighten the tone of this blog. I certainly did not expect it to become the most viewed post on here; let alone that it would be significantly more popular than the rest of my posts combined. Nor did I imagine anything I wrote would be garnering thousands of views. However, I’d underestimated the Minions.

For some mysterious reason Google took a shine to the post and people love searching for Minions. So pretty soon the post was attracting hundreds of views a day.

I feel there is only one proper way to celebrate this mile stone: the Banana Song

As the summer went along I was grumbling about the films that were around but in hindsight it looks pretty good. I didn’t see any really bad films and the disappointments were pretty mild. That said I do wish Hollywood would focus more on original films than endless franchises.

I am not a fan of the franchise and only went to see this because a lot of people recommended it. I’m glad I did because it was a lot more exciting than its predecessors and also had a nice pinch of quirkiness. Disappointingly, it still contains Gwyneth Paltrow’s lame portrayal of Pepper Potts but this is off set by Ben Kingsley playing the Mandarin.

All the fun of the first film with added War on Terror metaphors and a far superior villain.

Ok it’s clearly not as good as the Dark Knight trilogy – what is!? – or indeed its own trailer. Nonetheless, it didn’t deserve the derision it got. For a proper defence let me point you towards these two posts: ‘Man of Steel’ Is a Better Science Fiction Film than Superhero Movie and No, Man of Steel’s Superman is Not Your Superman. And That’s Okay.

If you read this blog it won’t come as a surprise to you to know that I adored this.

I don’t understand why but I found this funnier in theory than practice. It may have been that I watched it in almost empty cinema. At its most amusing when satirising local radio.

Heartwarming and biting simultaneously. Pretty funny too. Everyone I’ve spoken to this agrees the performances are great but can’t agree which is the standout one – apart from Allison Janney who is brilliantly repulsive as a hedonistic divorcee who clearly shouldn’t be raising bread dough let alone children.