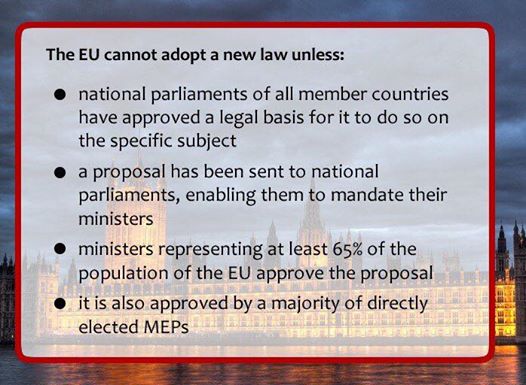 In the EU, we shape the rules. Outside, we might well have to follow them without having any say in what they are.

The debate about Britain’s membership of the EU is often presented as a choice between democracy and access to the European Single Market. If we leave, the argument goes, we endanger our access but we could make our own laws without ‘Brussels’ interfering.

I don’t really think much of this distinction. EU decisions are not imposed on Britain; they are made with our input. We elect Members of the European Parliament and our government sends representatives to the Council of Ministers. We also appoint a Commissioner and the membership of the Commission as a whole must be ratified by the Parliament and the Council. Sometimes we get outvoted but that’s what happens in a democracy. Indeed, that’s going to happen less at a European than at national level because a supermajority (or even unanimity) is often required to make decisions.

However, if we leave we are suddenly faced with a very direct choice between democracy and market access.

You can be in the Single Market without being in the EU. Norway is. But as the EU makes the rules of the Single Market that means Norway accepts rules it no longer plays any part in forming. This arrangement is known as ‘government by fax’ because before e-mail that was supposedly how the Norwegian government would learn about the new regulations they would be implementing.

Even more strikingly, part of the price Norway pays for access to the Single Market is paying into EU funds, the spending of which it has no control over.

From what I can tell the Norwegians are prepared to tolerate this arrangement because it allows them to avoid participating in the EU’s fisheries and agricultural policies. But while these industries are a still big deal in Norway, they employ fewer than 2% of the UK’s labour force. Jepordising the other 98% of the economy for the sake of these industries would be a strange decision.

The riposte of Brexiteers to this argument would likely be that the UK is bigger and more important than Norway so could get a better deal. But that’s complacent. Norway has a small population and huge reserves of natural gas, hence it may well need the EU less than Britain does.

And the mechanics of achieving an agreement are problematic. The Economist recently reported that:

The argument that the big British trade deficit makes the EU more dependent on Britain than the other way round might carry some weight with big German or Dutch exporters, but not with countries like Romania or Slovenia that export little to Britain.

Which creates a problem because:

[A] new trade deal…would need unanimous approval by all 27 countries and their national parliaments.

Is it so inconceivable that after months of seeing British politicians talking as if Romanians are an invasive species so vile that keeping them at bay is a national priority, the Roman government might well be minded to turn the tables on those same politicians. Rather than basing their decision on the unprecendentedly generous deal the UK will get in Dan Hannan’s imagination, Leave needs to face the unpalatable choice we actually face.

Part of the reason that’s true is that there’s a limit to how generous EU member states can be even if they are minded to be. A key element of the Single Market is that the regulations across the bloc are the same. That means if a British company finds an Italian customer it doesn’t need to adjust its product to make it compatible with Italian regulations because both countries share the same set of European regulations. If we want the power to make our own regulations, and Vote Leave insist that it’s imperative we do, then we are implicitly acknowledging that regulations in the UK will inevitably diverge from those of the Single Market.

You can theoretically concieve of ways to avoid this but they’re not practical. The EU could say that if a British product complies with British law then it can be sold in the Single Market regardless of whether it complies with EU rules. But that would be a ludicruosly one sided deal that a continent of 700 million would be unlikely to offer a nation of 60 million. If it did then at least one – and probably far more – of the twenty-seven member states would veto it. Alternatively, you could have a reciprocal agreement: we accept their rules, if they accept ours. That’s still unlikely: we are still the smaller party remember. And if it happened, it would involve precisely what Brexit is supposed to avoid – activities in Britain being governed by regulations made in Brussels.

In the event of Brexit, there is no half-way house in which we could assert our sovereignty while retaining economic integration. Being like Norway involves taking EU regulations without any role in making them. In order to avoid having rules imposed on us, we would have to bid a complete farewell to the European project, and opt for a relationship with our neighbours as distant as that we have countries on the other side of the world.

There is a way of squaring this circle: it’s called the European Union. It brings together the economies of its members states and enables their peoples to decide the terms on which that happens. It would be folly to choose to choose when we can decide to retain both.

P.S. Norway and Switzerland also have free movement of labour with the rest of the EU. So there would likely to also be a choice between staying in the Single Market and reducing immigration.