Trump is definitely not a moderate 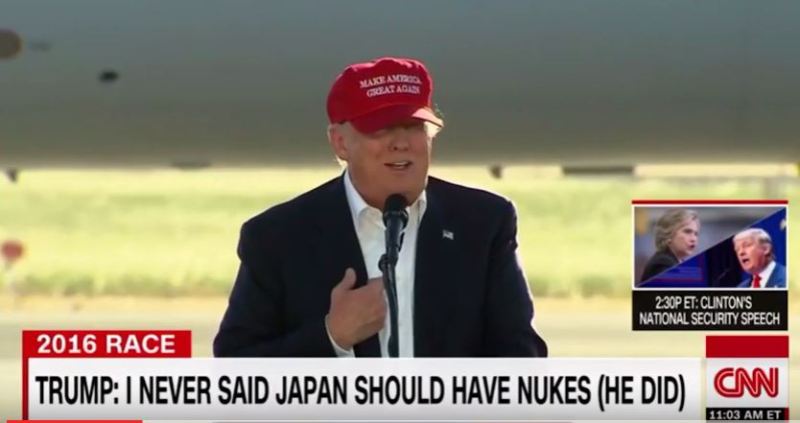 Trump is not a conventional hard-line Republican. But that doesn’t make him a moderate. It makes him a different (and more dangerous) kind of extremist.

The BBC News website currently features a curious video. In it the historian and Telegraph columnist Tim Stanley assures us that while Donald Trump’s “style might be a little crass and he’s said things people think should bar people from the White House”, he’s really a moderate.

Stanley’s opening gambit is essentially to tell us to look beyond the style of Trump’s politics to the substance of his policies. But that’s an unwarranted manoeuvre because there could well be substantive consequences to Trump’s style. In particular, when you have a candidate for President saying that he wishes that protestors at his rallies would be “taken out on stretchers”, it seems responsible to ask whether he might be normalising political violence. We’ve already seen the disturbing case of a homeless man beaten and urinated on by two men shouting “Donald Trump was right“.

To be fair to Stanley he has noticed this unpleasant underbelly of Trump’s campaign. Back in March, he wrote a column arguing not to overreact to the kind of violence we saw at Trump rallies because it “has been a part of American politics for a very long time” and cites as an example the Segregationist presidential campaign of George Wallace. While I see the parallel, I’m not sure it’s a reason to be sanguine. It’s been nearly half a century since Wallace ran for president and the fact that during that period overt racism and the inciting of violence have largely been kept out of mainstream American politics is quite an achievement. But as Trump has demonstrated, it was a fragile one. Indeed, Trump may well be more dangerous than Wallace. The Segregationist was only ever a 3rd party candidate but Trump is going to be the Republican nominee.

Nor do I accept that Trump’s policies are moderate. Stanley tells us that:

[Trump’s] no conservative. He’s a big spender, he wants the rich to pay more tax and he’s anti free-trade.

There’s a reasonable point nestling inside Stanley’s daft one. Trump has been willing to make rhetorical concessions to the notion that his white working class base needs government support and that that should be paid for with progressive taxation. But Stanley has been suckered by that rhetoric. Trump’s actual proposals on tax, reduce rather than increase the amount the richest Americans would pay. There’s still a reasonable argument that his policies in these areas don’t go as far as those of the likes of Cruz and Rubio. But that’s a flimsy basis on which to argue that Trump is a moderate.

And far from being centrist, Trump’s policies on trade are remarkably hardline. A 45% tariff on all Chinese exports to the US would be a massive step that would almost certainly provoke a global trade war.

If you’re worried about Donald Trump having his finger on the nuclear trigger, don’t be: he’s an anti-war candidate.

He even compares Trump’s policies to those of Jeremy Corbyn.

Once again it pays not to take too seriously what Trump says about his own positions. Trump says he opposed the interventions in Iraq and Libya. But he didn’t make any statements on Iraq until after the fact and actually said of Libya: “we have go in [sic]“. If we ignore his post-facto constructions of dovishness, it becomes clear his instincts incline – once again – towards violence. He’s proposed deliberately targeting the families of America’s enemies and occupying countries for the express purpose of stealing their oil.

The one regard in which he appears genuinely less willing to use force than his fellow Republicans is in defence of America’s allies. But rather than placing him closer to the mainstream, this fact illustrates his distance from it. The US joined NATO when Harry Truman was in the White House and its commitment to the organisation has more or less been a given ever since. Now Trump says it’s “obsolete” and “not meant for terrorism” because “NATO doesn’t have the right countries in it for terrorism.”  This analysis ignores both NATO’s role in Afghanistan and the continuing threat posed by Putin’s Russia. But it arises not just from individual errors of fact and reasoning but also from Trump’s very narrow conception of America’s interests. He seems them as a burden that America carries, not as a means to amplify its influence. And being the human embodiment of stereotypes about soulless businessmen, he quite often views those burdens in narrowly financial terms. For example, he has threatened to withdraw US forces from the Japan and South Korea unless those two countries contribute to the costs of keeping those soldiers there. This is dumb because a) the host countries already do make contributions and b) the costs involved are small in the context of the overall federal budget. Signalling to China and North Korea that the US placed so little value on its allies in the region would make it harder for America to deter them from taking aggressive actions. What is particularly alarming is that rather than trying to minimise the repercussions of what is already a big departure from current US policy, Trump seems likely to amplify them. For example, he suggested that if American troops were withdrawn, Japan and South Korea could defend themselves by going nuclear, a stance that would reverse the long-standing agreement amongst all the great powers that nuclear proliferation is a  bad thing.

What all these positions show us is that Stanley is being myopic. An expert on US politics, he correctly deduces that Trump is not a conventional Republican hardliner. American conservatism has come to be defined by a very particular policy agenda even slight deviations from which will be punished by the likes of Grover Norquist and the Tea Party. And Trump does indeed deviate from that, albeit mostly rhetorically.

But extremism comes in more than one flavour. Trump maybe a novelty in the US but his brand of authoritarian isolationism has plenty of precedents around the world. Some liken him to a Latin American “caudillo“, others to the European far right, and the new president of the Phillipines – who just told journalists they are ‘not exempted from assasination‘ – is often called ‘Asia’s Donald Trump‘. Most entertainingly, Trevor Noah suggested that while Obama was the US’s first African-American president, Trump would be its first ‘African president’ and went on to note his similarities to Robert Mugabe, Muammar Gaddafi and Idi Amin.

Trump may not adhere to any particular program but the fact that his notions are often half-baked doesn’t mean they aren’t dangerously extreme. Indeed, a significant reason his extremism is so frightening is that there seem to be few stances he will not take. Combine that with a character that seems paranoid, suspicious, hostile to outsiders, and drawn to violence and displays of machismo, and you have a very dangerous combination. Stanley is wrong to be sanguine about one of the most menacing politicians in American history.