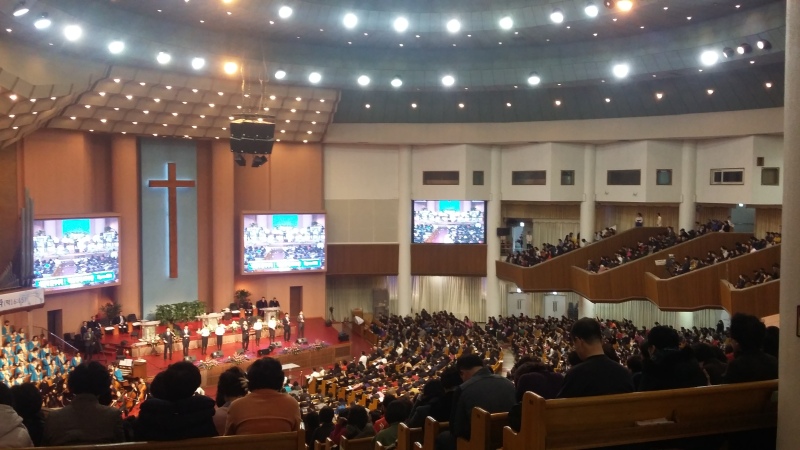 Three years ago, I wrote a post about the Yoido Full Church, which is probably the largest church in the world. I quoted the Economist reporting that:

It looks somewhat unprepossessing—a brownish blob surrounded by office buildings—but Yoido boasts 830,000 members, a number it says is rising by 3,000 a month. One in 20 people in greater Seoul is a member.

Each of the seven Sunday services at Yoido is a logistical challenge: apart from the 12,000 people in the main sanctuary, another 20,000 follow the service on television in overflow chapels scattered around neighbouring buildings. Some 38,000 children go to Sunday school during the day. As one service begins and the next ends, around 60,000 comers and goers are ushered by white-jacketed traffic directors. If you want to attend one of the two services starring the church’s founder, David Cho, you need to be an hour early or you won’t get in.

I wrote about it because I was doing a series on Pentecostalism of which Yoido is a rather spectacular example. It was not somewhere I anticipated ever visiting. But this morning I did.

The author of that Economist piece was not exaggerating as far as the logistics go. The manager at my hostel told me she avoids driving near the church on Sunday mornings because the traffic is so bad. Despite the challenges posed by its size, Yoido makes a compelling argument for economies of scale. It is a very slick operation. I arrived and was immediately greeted by one of their team of ushers specifically tasked with greeting foreigners, I was then passed along a conveyor belt of team members to a special section for worshipers from overseas and invited to a special post-service meeting for non-Koreans. Most impressively, I was given a headset so I could listen to a simultaneous translation of the service.

The church itself is a about the size of a concert hall. Indeed both its scale and design, reminded me of the Barbican Centre. The comparison seemed apt as it has its own orchestra and a choir of professional quality singers that’s larger than most congregations. It’s not the best church music I’ve heard. It lacked the richness and otherworldliness of say an English Cathedral Choir. But that’s delivered to a couple of hundred people at a time. This needed to reach thousands upon thousands of people and be good. And that consistency extended to the other aspects of the service, which were engaging even in translation.

Initially the proceedings appeared more mellow than I was expecting. There were traditional hymns rather than worship songs. And while the preaching was on the more interactive end of the scale – there were a lot of things we were supposed to call out – it was also more dignified than many evangelical services I’d been to before. But I’d misread what was happening. I’m used to churches that are literally and figuratively amateurish: the people running them generally don’t have the skills or the resources to produce an emotional reaction on cue. The team at Yoido do. They could therefore let a state of fervour gradually develop. And by the end, prayers were accompanied by much of the congregation rocking backwards and forwards.

In the world but of Korea

Yoido is unmistakably Korean in ways that go beyond the obvious. The narrative it tells us about faith is very tied up with the country’s recent history. Indeed Yoidi itself, a church that dragged itself from a tent outside a US army camp to a being a feature of one of the world’s great cities,  functions as a good metaphor for that history. And the apocalyptic and Manichean overtones of evangelical theology take on a new resonance when you are twenty miles from the DMZ. My impression based on an admittedly short stay so far is that South Koreans think about their belligerent northern neighbours less than outsiders imagine. But Yoidi really does major on the topic: prayers about or for the country were said no less than four times. When Christians in most countries worry that militant atheists are attempting to destroy their way of life that’s merely paranoia but in Korea it’s indisputably true and that seems to have seeped into the character of at least some of its Christianity.

Despite its emphatic Koreaness, Yoido is probably the most cosmopolitan church I’ve ever attended. As I’ve mentioned already, there are impressive efforts to welcome worshipers from overseas. It also seems to put a lot of emphasis on overseas evangelism: the church apparently has over 700 missions abroad at the current moment. And the congregation was regaled with tales of how its pastors were spreading the gospel around the world. It is presumably with the intention to assist them in that endeavour that the church runs English classes. Most remarkably the sermon at the service I attended was delivered in English by the National Director of the Philippine Council of Evangelical Churches. The world’s largest church apparently takes the world as its diocese.

As impressed as I was by Yoido, I concluded that even if I lived in Seoul I would be unlikely to attend it regularly. I couldn’t warm to its bombast nor to the didactic nature of its message. I also have a particular aversion to faith healing, which featured prominently in the service. I fear that a) it risks putting people off seeking proper medical help, b) puts a decidedly un-protestant emphasis on the need for someone to act as an intermediary between god and ordinary Christians, and c) insults God by suggesting he lets people suffer illness until somebody casts the right spell. My prejudices about it weren’t helped by a video we were shown this morning of a previously lame woman in the Cote D’Ivoire miraculously walking without crutches after being prayed for by one of the church’s pastors. The problem is that she didn’t walk so much as stagger forward weakly for two or three paces in exactly the way you’d imagine someone would if they believed they’d been cured but hadn’t. And even to someone poorly versed in Korean politics the way the church steers it congregation towards supporting conservative candidates was pretty blatant. President Park Geun-Hye was prayed for by name. It was specifically flagged up that one of her party’s representatives in the National Assembly was in attendance this morning. And the congregations attention was drawn to an apparently troubling piece of legislation before the National Assembly.*

Lessons for the endangered species known as the western protestant

However, what I’ve been mulling the most since I left was something rather different: the age of the congregation. The reason for this is to do with something called the ‘secularisation hypothesis’. Essentially this says that as societies modernise that they will tend to become less religious. This has been given credence by falling church attendance in Europe and North America. But a big growth in church membership in the developing world has more than offset this, suggesting that maybe secularisation is basically a western phenomenon. Booming churches in Korea seemed like an example of this. But I recently read Daniel Tudor’s Korea: the Impossible Country, which briefly notes that young Koreans are actually less likely to attend church than their parents. Yoidi would seem to support this. The people in attendance were not as geriatric as those at a typical western church. Nonetheless, they clearly skewed towards the upper end of middle aged. That might indicate that the secularisation hypothesis needs modifying rather than discarding. Maybe it is that the disruptions and uncertainties of industrialisation and urbanisation drive people into church – the Victorian era was after all a highpoint of church attendance in the UK – and when these abate so does churchgoing. If that’s what is happening in Korea then it may well be that in a few decades time the booming churches in China, Nigeria and the like will start shrinking.

It is tempting as it is for stale churches in the West to look at places like Yoido and see a model they should emulate. But that’s probably not going to work. Christians in Europe and North America probably need to find their own solutions rather than trying to assemble flatpack models from other parts of the world.

*In the interests of transparency, I should note that my headset began glitching at the point this was discussed. I still think I caught the general gist but not what the actual legislation was.

One thought on “Cable from Korea #1: the world’s largest church”