My wager with the universe 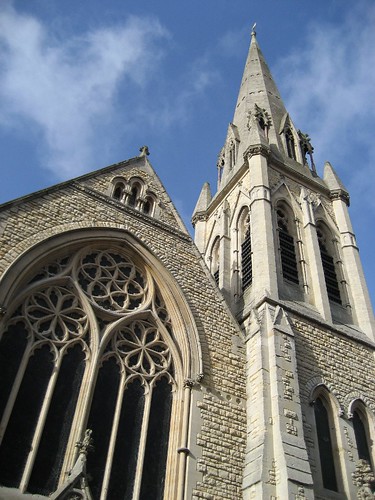 In Matter of Facts’ first ever guest post my friend and Oxford doctoral student Helen asks “Does my weak and wavering belief make me less of a Christian?”

I have wanted to write about religion and faith many times over the last few years. I think that Christians have a duty to evangelism, or at least to openness, and I’m aware that I’ve been copping out. What has stopped me is the knowledge that writing about this topic opens me up to intensely personal attack – all the tired new atheist claims that religion is silly and irrational and, by extension, anyone who has faith, including me, is silly and irrational (thank you, Richard Dawkins; thank you, Bertrand Russell – your teapot-ian and Pasta-farian analogies have certainly been colourful).

I understand the feeling which says that these metaphysical claims are so bold as to be ludicrous: how can anyone claim to know what happened 2000 years ago? Why take Christian claims any more seriously than those of other ancient mythologies? (I hope we all agree that Zeus doesn’t exist). If I claimed to be the incarnation of the eternal Son of God, most people would, rightly, question my sanity. Why should we believe the hearsay of people who claim to have talked to people who were there when Jesus was reportedly making those same outlandish claims? Or even when Paul started making them on his behalf and was much more theologically extravagant than Jesus ever was? Earth is one tiny pinprick in the universe; by what hubris do we claim to be the pinnacle of Creation?

I understand the feeling that we are alone in universe. It’s obvious that God doesn’t answer the majority of prayers. One of the major components of each church service is intercessions, which invariably include prayers for troubled areas of the world. Yet the slaughter continues in Syria, the CAR, South Sudan et al. Even if God did answer prayer, would that be just? Why should people who are friends and family of believers receive priority in the queue for divine healing?

I understand the feeling which distrusts anything that Christians say. The church is an institution which has slaughtered and oppressed in the name of a man (/God) who taught love. Christian churches today continue to exclude the LGBTQ community; continue to condone and cover up sexual abuse of children by priests; in some areas of the world has been known to torture children in the name of driving out demons. If the church truly receives the Holy Spirit, shouldn’t Christians be better than other people?

I could go on. The point that I’m trying to make is that I understand unbelief. It’s also to say that I experience doubt, intensely and continuously. It’s easy for believers to talk a good talk about what God has done for us, and I can do it as well as anyone. But I think it’s important not to be a hypocrite (Jesus reserved some of his best vitriol for hypocrites), and doing that means admitting that there are periods when I have trouble meaning it when I say the Nicene Creed.

And yet I continue to describe myself as a Christian. Why?

Intellectually, I’m neutral on whether the arguments for the existence of God (or any god) succeed. I find the teleological argument persuasive; the universe is very beautiful. I understand that the balance of matter/energy/gravity relies on fine-tuned physical constants but, as I am not a physicist, I don’t feel in a position to comment on whether this provides evidence of a creative purpose (or perhaps intelligent design). I understand that the process of evolution means that it isn’t necessary to posit the existence of a God in order to get from mindless amoebas to moral humans. However, it isn’t necessary that evolution had to follow this particular path, and I do think that there is something intrinsically good about the fact that humans exist, with their capacity for love and happiness. Maybe the universe rolled a six, or maybe the dice was weighted.

What tips me over from agnosticism to a position in which my working assumption is that God exists is this: I find the Christian narrative very beautiful. I think it speaks to human nature. Christianity claims that the universe was created by a loving God; a God whose very nature is love between the persons of the Trinity. Christianity claims that humans were created as reflections of the image of God, for the purpose of loving each other and loving God in relationship; but created with the capacity for evil in order that we also have the capacity to choose good in a meaningful way. That God united our nature with his in the incarnation; identified himself with the human experience and human suffering; that he underwent death, which is the ultimate consequence of separation from the God of life, and overcame it in the ultimate expression of love. That the Holy Spirit is sent to guide and empower us.

And let’s be clear, because so many people have been hurt by other Christians – I don’t believe that either homophobia or misogyny are parts of the Christian message. These bigotries are ugly, not beautiful.

And let’s be clear once again: I know that wanting something to be true has no influence on the truth value of any metaphysical proposition. Christianity seems to me to be likely to be true because I can’t conceive of a human person inventing such a beautiful and absolute statement of love. I think it’s likely to be true because this religion has always been ahead of the ethical curve, from Old Testament prophets railing against the emptiness of religiosity unaccompanied by social justice, to Jesus extending the hand of friendship to prostitutes, Samaritans and tax collectors; perhaps it’s a reflection of my own natural cynicism that I find divine inspiration a more plausible explanation for this than individual humans overcoming the standards of their time.

However, I’m not sure that establishing the truth value of this system matters all that much to me. I think that a universe in which Christianity is true is better than a universe in which it is not true and so I have chosen to have faith in the Christian message. It gives me hope. It requires perfect morality at the same time as acknowledging that I will fail to live up to those exacting standards. It provides a mechanism for repentance and absolution. I choose to live my life as though there is a God, and as though Christianity is true.

Does my weak and wavering belief make me less of a Christian? I think that many people would say so, including some atheists, and some fellow believers. Do I have, in the terms of the modern charismatic and evangelical movements, a “personal relationship with God”? I don’t hear God speaking to me; I don’t generally experience his presence. In the past, I’ve tried desperately to trick myself into having religious experiences, and I’ve felt desperately guilty for my doubts. I’ve come to the conclusion that self-induced religious experiences because I want to fit in and be a good Christian aren’t worth anything; maybe I have genuinely felt the divine presence in the past, but I can’t guarantee it.

One of the catchphrases of believers is that “love is a verb” – by which we mean that what’s important is not how we feel, but the way that we treat people. I think that faith is a verb. If I take this particular (Pascal’s) wager seriously; if I commit to the Christian life in prayer, meditation and action – I don’t believe that God will begrudge me because I’m unable to have the appropriate emotional experiences on cue. And just perhaps, the fact that I don’t know that God exists means that it requires a bit more faith to take up my cross and follow Christ.

That’s where I am at the moment, although things are always subject to change; I’ve decided to set aside doubt and just get on with being a Christian. I’m acutely aware of my failings in this regard; Jesus preached a message of radical self-sacrifice, which requires more of me than limited charitable giving and/or limited voluntary work; it requires my whole life to be a sacrifice for the kingdom of God. I’m currently in the process of trying to work out what that might mean.

I’m sure that a lot of people will disagree with what I’ve said here, and I’m pretty sure that I haven’t changed anyone’s minds about the legitimacy of Christian faith. Belief in a theistic God will always be impossible for some people, and that’s OK; I certainly don’t think that means that they are condemned to an eternity of torment. However, I also think that it’s not justified to compare my own commitment to this particular worldview to a belief in fairies, a celestial teapot or a flying spaghetti monster. I hope that I’ve clarified for more people exactly where it is that I’m coming from on this matter, and perhaps challenged some assumptions about what it must mean to have faith.

Christianity, for me, can be described as having faith in love, in the hope that it’s true. St Paul claims that those are the three things that will last; the greatest of all is love.

3 thoughts on “My wager with the universe”