Why would God flood the whole world? – Noah as truth and metaphor 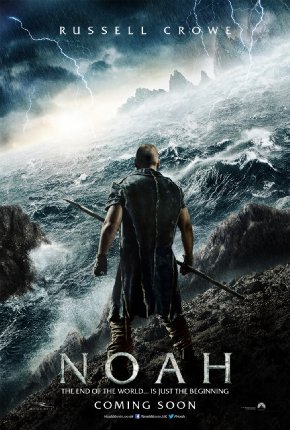 Note for UKIP councillors: at the end of the story God promises not to do it again!!!

There is a tradition in the John Wesley Society known as group services of occasionally sending students out to lead services in churches we would not normally visit. I found the text of a sermon I wrote for one of these from a couple of years ago. I think was about the second part of Genesis 8: the final part of the story of Noah.

I’m posting it here for two reasons. Firstly, because a new film about (and called) Noah staring Russel Crowe and Emma Watson is being released this week. And secondly, because what I wrote touches on a theme that is often of interest to non-Christians: how literally to understand the Old Testament and what to make of the apparently vengeful God who appears in it.

If you had asked my five year old self, what his favourite song was he’d likely have told you it was the animals march in two by two. Does anyone here know it?

Our adult perception of the story differs little from this children’s version. We shout “hurrah, hurrah” at the cute adventure of a family on a boat with a menagerie of animals, ignoring what is happening under the water. For all its superficially comforting familiarity, the story of Noah should be a shocking reminder to the contemporary Christian of just how violent the early section of the bible can appear. We tend to be more comfortable the New Testament God who tells us to turn the other cheek than the Old Testament God who in psalm 137 calls for the babies of Babylon to be smashed against rocks. And nowhere does God seem more barbaric than when he responds to the violence of the world, with the most immense act of violence conceivable, drowning virtually every living thing.

How then do we link the covenant we heard about in Genesis, symbolised by a rainbow but forged in a massacre, with the covenant established by Jesus’ resurrection?

The key point to grasp here is that the story of Noah did not actually take place. To see why consider the following fact, dinosaurs became extinct about 65 million years ago yet geologists can say with reasonable degree of certainty not only that it was caused by a large comet or meteorite colliding with the earth but that the impact crater from this collision is in present day Mexico. Now ponder this: modern humans have been on the earth for about 200,000 years and as the biblical account of the flood contains human characters, so if real then it would have taken place within that time. Yet despite this supposed event being of a comparable scale of calamity to the collision and having happened so much more recently geologists, archaeologists and palaeontologists have found no trace of it. No major disruption of the fossil record, no simultaneous disappearance of civilisations in different parts of the world, nothing in fact to indicate the entire world being flooded. In addition, the logistics of the whole thing are rather implausible – gathering together two of every species, building an arc big enough to house all of them and catering for the diverse dietary requirement of all of them for a year – did they have a bamboo farm on board for the Pandas? – doesn’t seem within the reach of a single Stone Age family. Oh and Noah is supposed to have lived to be a thousand years old. It is evident therefore that Noah and the flood are fictional.

Fiction and truth are not, however, mutually exclusive categories. The American theologian Reinhold Neibuhr was once asked if he thought that the account of creation in Genesis was literally true. He replied “no, it’s much truer than that.” The best fiction shows us truths. Frankenstein conveys a truth about the perils of playing God, Animal Farm a truth about how without democracy leaders will always turn on their people, and Adrian Mole gives you all the truth you need about how strange and uncomfortable it is to be a teenage boy. Jesus makes extensive use of this technique: the Good Samaritan and the Prodigal Son are not real but the insights their stories give us are.

Peter’s letter points us to the truth that is being conveyed by the story of the flood: the flood waters cleansing the earth of sinful people prefigure the waters of Baptism cleansing our souls.

My personal view is that the parable of Noah is essentially a thought experiment. It is asking what would happen if God tried to lead humanity out of sin by destroying everyone but a hardened core of righteous people. The answer is nothing at all, sin would persist as before. It does not take long for this to become evident. For after the flood, Noah winds up placing a curse on his own son. And this was just the start for the Biblical account would imply that all the humans alive today are descendants of Noah and we know all too well their capacity for harm. The problem is that sin is such an integral part of the human condition that even if God only saves the most righteous people they will still sin. If he destroyed all the sinners, there would be no humans left.

God knows that none of us can shake our own dark side because every time someone has tried and failed to shake it he has seen it. So rather than getting rid of a sinful humanity, he plunged into it, taking on human form and allowing himself to be murdered, but rather seeking revenge he offered absolution. And it is that offer of unconditional forgiveness for our sins that is the heart of the new covenant that Jesus makes with us.

God’s promise to Noah to never again flood the world is thus an essential prelude to Jesus’ covenant with us. He is promising never to do again, what he has never done and which on account of his loving, forgiving nature he could never conceivably do. He spares us violent destruction, so he can offer us loving grace. And while only members of Noah’s family, 8 people in total, were supposedly saved on the Arc, the new covenant opens salvation to everyone. Now that is something worth singing “hurrah, hurrah” about.