When is Sherlock coming back?

On Metro’s TV blog, the people behind the Sherlockology FB page have a go at answering this REALLY IMPORTANT question. However, the frustrating answer seems to be:

[A]t the moment, we simply have to say ‘We don’t know yet‘.  It’s not ignorance though; it’s genuinely because there is no date yet

Though they do venture some guesses:

Thanks to the Internet Movie Database, the most popular is October 31 2013, which is definite no-no. We know for a fact that post-production will still be on-going for Sherlock until way into November, which also counts out the second most popular rumoured date of November 24 2013 (which would of course be wonderful, a one-two-Who punch for Team Moffat and Gatiss across a single weekend).

Both dates have been consistently denied by the production team on Twitter, with both Mark Gatiss and Sue Vertue shooting them down for the past few months. So for a little while longer, that air-date has to remain a mystery.

But while we never speculate, we’d put the smart money on Sherlock series three debuting in a few months time, and not, sadly, in a few weeks as some websites may have you believe.

So be prepared to carry on feeling like this for a while longer: 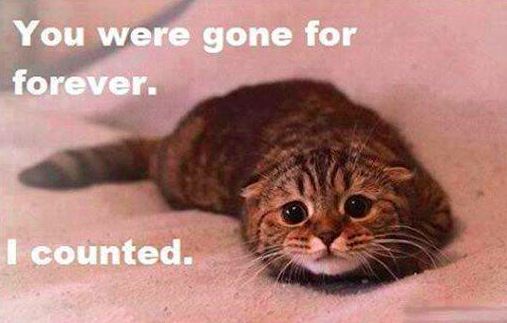 2 thoughts on “When is Sherlock coming back?”